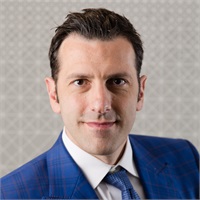 Nash understands what it takes to be committed and to succeed. The Bosnian civil war – and basketball – helped set the stage for the thriving life and financial career of WestPac Wealth Partners’ CEO. At 13 years of age, Subotic fled Bosnia with his family to escape the violence devastating their country.

As a teenager, Nash learned he had a passion and a great talent for basketball. His strong skills opened the door to an athletic scholarship from Hawaii Pacific University. Today, he takes great pride in the fact that he earned his bachelor’s degree and his MBA within five years, all while learning a new language.

During his senior year in College, Nash knew he wanted to create his own business and become the master of his own financial destiny. He chose financial services because he felt he could have a huge impact on other people’s lives. His time as a collegiate athlete prepared him to take calculated risks and become an entrepreneur.

After nearly five years with a prominent financial firm, where he began his career, Nash founded what would become WestPac Wealth Partners in September 2007. Despite the financial crisis unfolding on Wall Street, he felt it was a great opportunity to start his own wealth management company and acquire clients that were unhappy with the performance of their previous advisors.

Starting with just three reps, WestPac has grown to more than 150 financial representatives in California, Nevada, Washington, Oregon, Montana, Arizona and Hawaii. It’s truly a case of entrepreneurs working with entrepreneurs, where all are interested in the success of their clients. Today, WestPac Wealth Partners has over $1.1 billion of administered assets, over $109 million of recurring in-force premium, and has seen more than $75 million1 of clients’ life and disability claims paid, making the it one of the fastest growing financial firms in the United States.

As a Chief Executive Officer of WestPac Wealth Partners and Affiliates, Nash oversees the strategic direction of the firm, talent acquisition, and works with high net worth clients.

Besides basketball, Nash loves to play tennis, chess, travel and spend time with his wife Marija and two beautiful children, Bianka and Alek.